While drunk driving is on the decline, it remains an epidemic. In 2015, 10,265 Americans were killed in alcohol-related crashes – equivalent to one death every 51 minutes. According to surveys conducted by the AAA Foundation for Traffic Safety, 14% of drivers admit to having driven when they thought their Blood Alcohol Concentration (BAC) was close to or over the legal limit at least once in the past year. In total, alcohol-related crashes cost the public nearly $50 billion annually.

Given these disheartening statistics, there is only one acceptable message for motorists: if you choose to drink, don’t drive. Use a designated driver or an alternate mode of transportation.

AAA is committed to educating members about the risks of drunk driving. Click here to learn more about the dangers of drinking and driving and click here to test your knowledge with a 12-question quiz.

Cannabis impairs virtually every driving ability, including cognition, coordination, and reaction time. Drivers impaired by marijuana are more likely to weave within or between lanes and are ill-equipped to respond to unexpected events.

But many drivers aren’t aware of the dangers of combining marijuana and driving. According to surveys conducted by the AAA Foundation for Traffic Safety, only 58% of drivers believe marijuana increases crash risk. As a result, too many drivers are impaired by marijuana: 4.6% of American drivers admit to driving within an hour of using marijuana at least once in the past year. 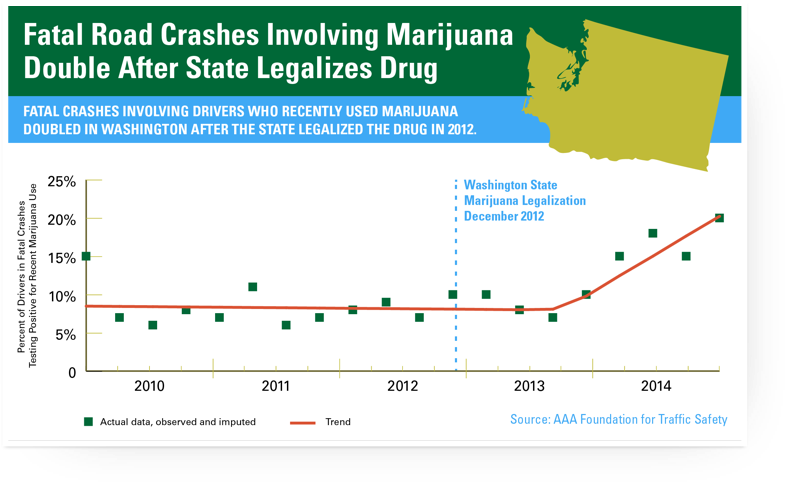 Drugged driving is a growing problem. In 2013-14, one in seven weekend nighttime drivers was impaired by an illicit drug – a greater proportion than in previous years.

It is always illegal to drive while under the influence of an illicit drug. Different types of drugs have different effects on drivers – but none of them are positive. Drugs impair judgment, perception, attentiveness, and coordination. And when two drugs are taken together, the combined effect may be worse than the sum of its parts.

To get the facts about drugged driving, click here.

When people think of impaired driving, they usually think of driving under the influence of alcohol, marijuana, or illicit drugs. But prescription and over-the-counter drugs can also negatively affect a driver’s ability to operate a vehicle.

Some labels warn drivers not to “operate heavy machinery” while on a certain medication, and a two-ton car is certainly a heavy machine.

1. Be a designated driver.

2. Educate friends and family members on the dangers of driving under the influence.

5. Seek or refer others struggling with alcohol abuse to community assistance like local 12 step & AA groups.

6. Seek or refer others to a mentorship program that emphasizes accountability.

7. Correct the misperception that “everybody is drinking”.

9. Never provide alcohol to a minor.

10. Revisit the topic over the years to reinforce prevention messages.